All Play and Some Work: My Internship at the CIG

All Play and Some Work: My Internship at the CIG 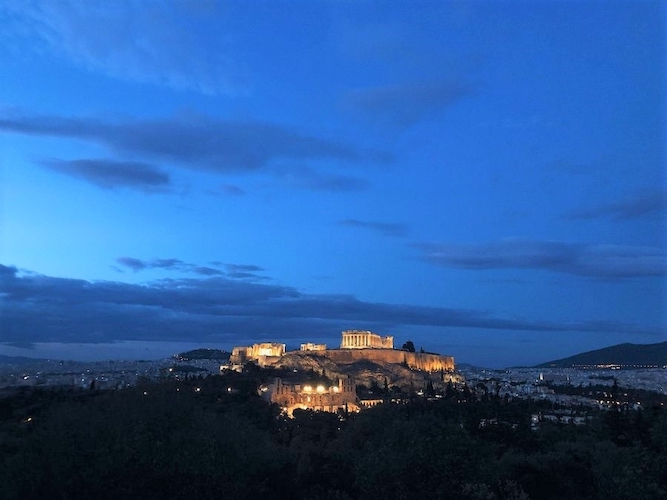 After three flights and 24 hours of travel, I arrived in Athens in early May. I had been wanting to be an intern at the CIG for years (since before covid) so I was very excited to finally arrive in Greece. As a student of archaeology and classics, I was ready to dive headlong into history. 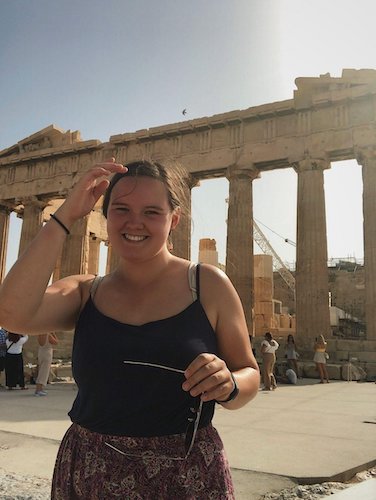 I spent most of May exploring Athens. I visited the National Gardens, Olympieion, Acropolis, and many other classic Athenian sites. The Acropolis has been very high up on my bucket list for years, so finally checking it off meant a lot. I’ve visited several times since, and it never gets any less spectacular. One of my favourite things about Athens is how the Parthenon plays peek-a-boo, popping out from behind buildings and at street corners all over the city. I also watched my first of many sunsets from Lycabettus Hill, and tried many traditional Greek foods. 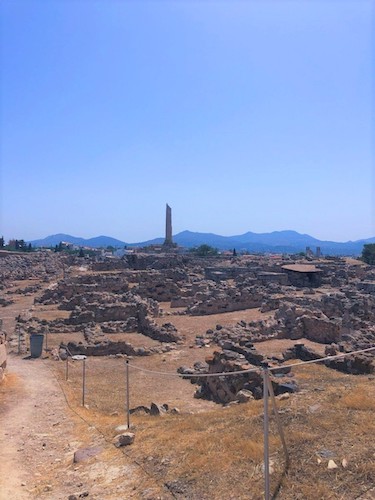 My first trip outside of Athens was to Aegina with my good friend Emily, who was here in Athens conducting research at the Canadian institute. We visited the Temple of Apollo, went to the beach, and spent an embarrassing amount of money on souvenirs in Aegina town. Emily also served as our de facto translator, given the fact that my Greek was (and still is) largely limited to “ena frappe glyko parakalo” and a lot of words that roughly translate to “*#$@#$%&!”
The institute also hosted Hallie & Toph Marshall and the UBC 2022 Go Global Greece class in May – they performed the ‘Dawn Chorus’ from Euripides’ fragmentary Phaethon, which was absolutely fantastic. I had the opportunity to become friends with many of the UBC students, and had a great deal of fun “carousing” around Athens with them, as Jonathan would say. 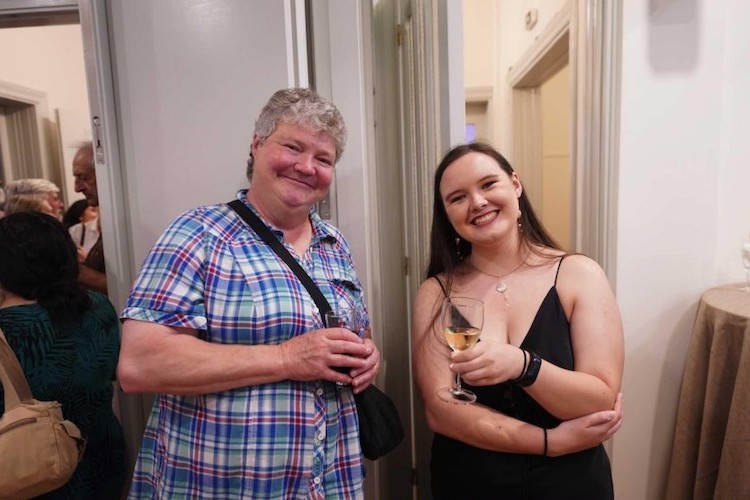 At the institute, the end of May and beginning of June was an exciting time – we hosted the Inauguration of the Institute’s new building, and the annual Open Meeting. I had a fantastic time at the Inauguration, pouring drinks and rubbing elbows with archaeologists and diplomats alike. By the Open Meeting, I was an expert in creating beautiful charcuterie boards; more importantly, I greatly enjoyed all of the reports on the projects run through the CIG, and Dr. Chelsea Gardner’s presentation on the CARTography Project. I had the opportunity to have dinner with her and several other Canadian and American archaeologists after the event, which was the cherry on top of a wonderful evening. Another bright spot was meeting so many friends of the institute, such as one of the CIG’s first Fellows! 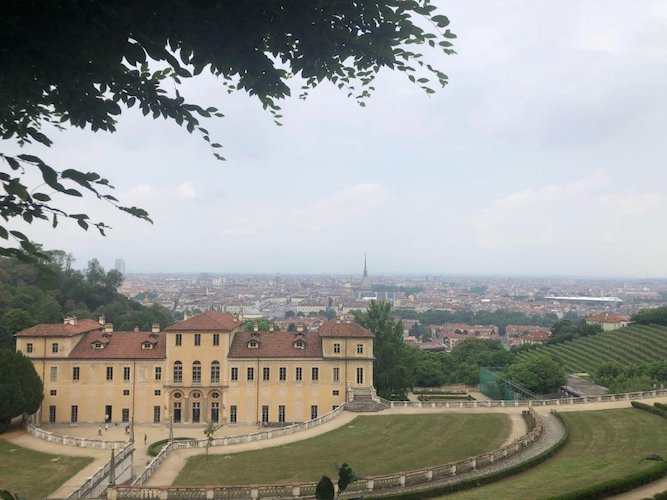 Immediately after the Open Meeting, I headed off to Turin and Milan for a weekend, where I visited art museums, cathedrals, and the second-most important collection of Egyptian antiquities in the world. I also stopped by several archaeological sites, and ate my weight in gelato and pasta. All in all, it was a great trip. After Italy, the CIG hosted its last event of the year, a lecture by Dr. D. J. Ian Begg about his book on Gilbert Bagnani; I particularly enjoyed the lecture both because I found the content interesting in itself, and because Bagnani spent much of his life in my mother’s hometown in Ontario, where I spent all of my childhood summers. 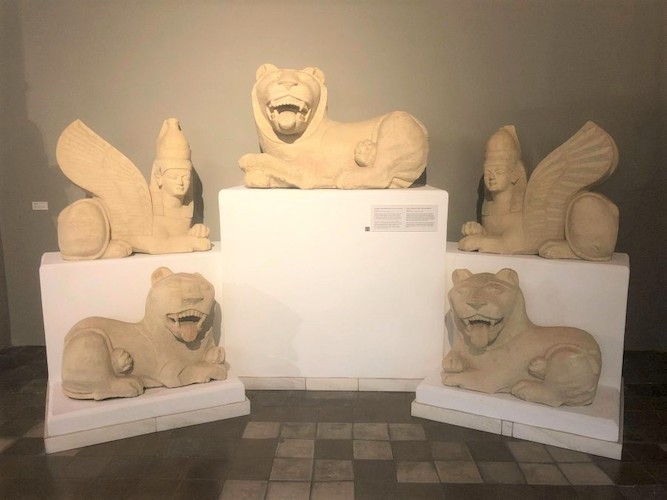 Display in the Cyprus Archaeological Museum

My next trip took me to Cyprus, where I saw the United Nations Buffer Zone, an incredible natural landscape, and the national archaeological museum. I also got a terrible sunburn on the beach, so bad that my bright red skin almost looked like it was emitting light. The whole experience was wonderful, and Cypriot people are so kind and welcoming.

With one of my bullseye’s at the Red Lion

Upon my return to Athens, I continued visiting all of Athens’ many archaeological sites, from the Lykeion to Hadrian’s Library, which has been the best experience. I’m a huge classical history nerd, so I never get tired of looking at columns and remaining bits of walls. With my friends, I’ve also taken advantage of Athens’ wonderful restaurants, bars, and museums. I also made it a point to make it to many Tuesday nights at the Red Lion, where I earned the nickname “Bullseye Kate.” 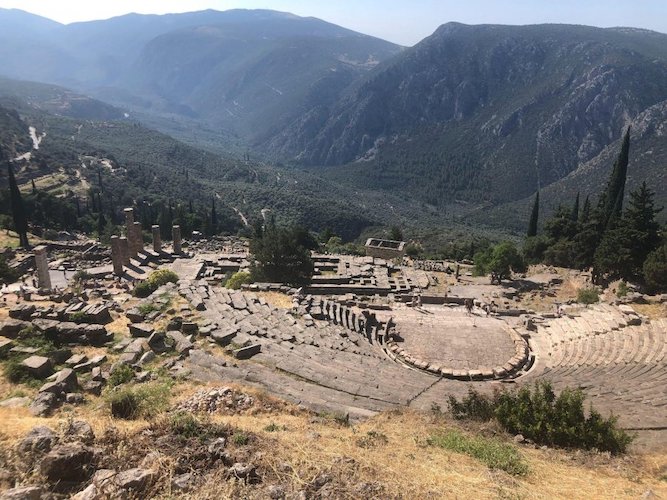 An overview of ancient Delphi

I then headed to Delphi, which was indescribable. Getting off the bus and seeing the mountains stretching out to the Mediterranean was a wondrous sight. We stayed the night in Delphi and got to the site as soon as it opened, so we had it all to ourselves. Walking around, I understood why this place was seen as mythic. We also visited a wonderful artist’s shop – she was incredibly kind and I got my favourite souvenirs from my entire trip. 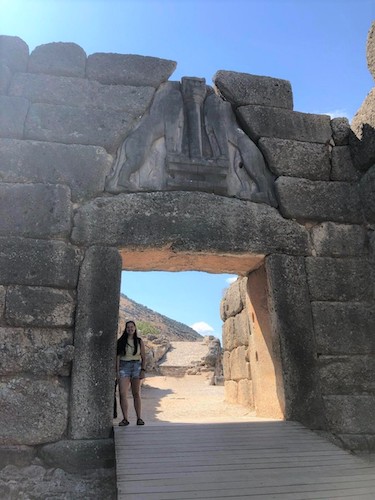 Standing in the Lion Gate at Mycenae

After Delphi, I headed to Nafplio, where I taught my friends to look for pottery sherds in the dirt and climbed the supposed 999 steps up to the Fortress of Palamidi (it took me an embarrassingly long time to reach the top). I returned to the area later to visit Mycenae and Epidaurus, which were both incredible. I found handles of amphoras in the dirt near Mycenae, which was surreal – I felt like a real archaeologist! At Epidauros, I stood in the center of the Amphitheatre and tested the impeccable acoustics myself. 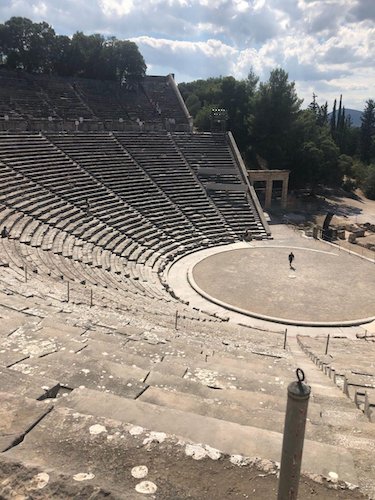 The theater at Epidaurus

That trip was followed by a quick jaunt down to Sounion, and then a weekend in Meteora, where I nearly died while hiking up to the monasteries in 40 degree heat, but where I also had the most incredible time touring the monasteries and nunneries and imagining what those places would have been like 500 (or 1000) years ago. A nun took a particular liking to me at St. Stephen’s and showed me around, explaining all of the frescoes and occasionally scolding visitors for exposing a shoulder or knee.

Panorama of Meteora, with monasteries to the right

Finally, for my 21st birthday, I headed to Thessaloniki, where my personal favourite spot was the Rotunda, built in the 4th century AD. It has beautiful mosaics; I marvelled at the fact that they were still in such good condition after so many centuries. While in the area, I also headed out to the archaeological site of Pella, the capital of the once-great Kingdom of Macedonia, and Vergina, where I saw the monumentally impressive tomb of King Phillip II. While in Thessaloniki, I also had perhaps my favourite ice cream of all time – if you’re in the area, do yourself a favour and get a few scoops of almond praline from Fregio. 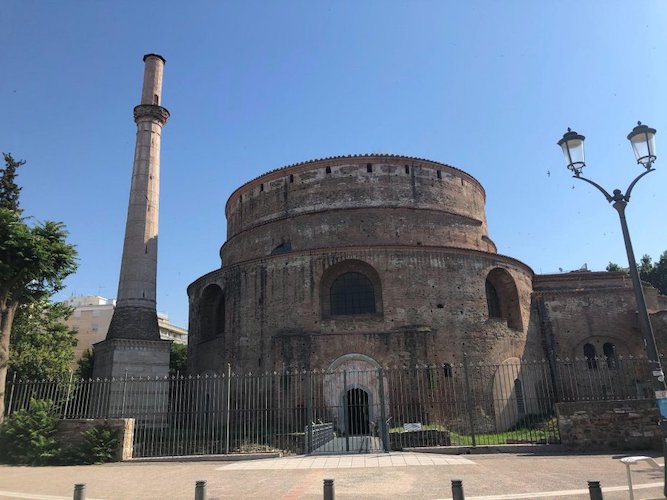 The Rotunda in Thessaloniki

While you may believe that my experience at the CIG has been all play and no work, I actually did manage to fit a few hours of work in between all of my travels. I worked primarily in the library, cataloguing new items, updating the catalogue, physically schlepping books back and forth between different shelves, and finding volumes that we perhaps do not need to keep. However, as the number of interns dwindled from three to one (me!), I also took on the tasks of laundry (which is never-ending), welcoming visitors to the CIG guest apartment, handing out free-entry passes, working on the new website, writing descriptions, and more.
These are just a few of the (thousands of) pictures and many experiences I’ve been lucky enough to have while in Greece. I’ve had the chance to meet so many wonderful people, see incredible sites, and enjoy absolutely every aspect of life here (except for the fact that you can’t flush toilet paper down the toilet)!

I can’t wait to come back soon!