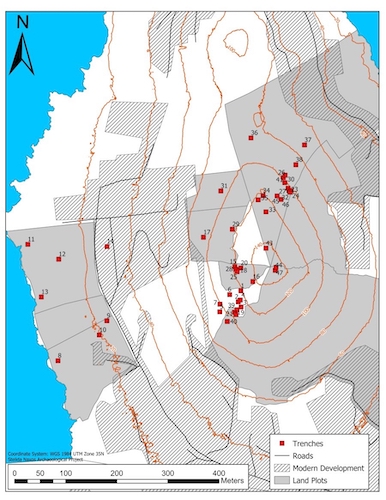 This season the Stelida Naxos Archaeological Project stepped back from fieldwork, and focused our attentions on post-excavation study, with a small group of us working for just over a month in the Ministry of Culture’s new storage, and research facility.

The process started with three of us overseeing the transport of all 358 crates of artifacts, and samples from the old apotheke in the post-town of Chora, to the new facility just outside of Glinado. We are honoured to be the first project to have moved into this terrific new building (light, cool, and spacious); while we will miss our old town centre base, we simply did not have the space needed to properly study our finds. Moving day was unsurprisingly tiring and sweaty, and we spent much of the next month slowly reorganising the heavy crates into a logical system, but all went very smoothly thanks to the Ministry approved transport company, and the fact that the new apotheke is big enough to have a truck drive the crates straight into the basement… 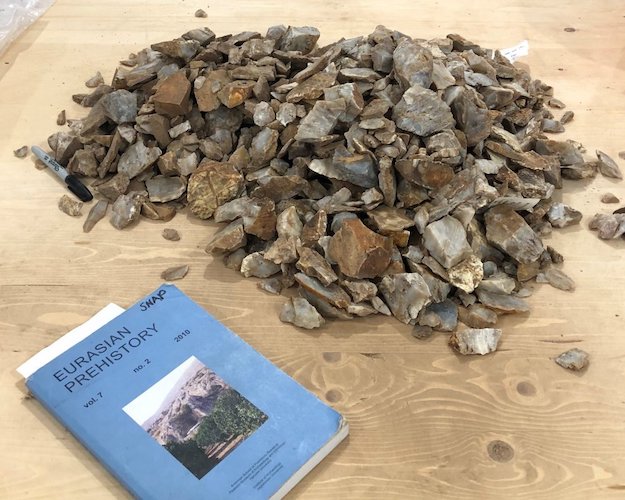 Figure 2: Small sub-set of the early Aurignacian stone tool assemblage from trench 28, with the Klisoura Cave (Argolid) publication to hand for comparanda (SNAP).

Thereafter our work had four main foci. My initial work concentrated on studying the material from trench 28 (Fig. 1), one of our incredibly productive sondages immediately adjacent to the chert outcrop, and in front of Rock Shelter B, an area we believe that was used for seasonal residence in the Pleistocene (Ice Age). The upper strata contain a mass of classic early Aurignacian stone tools and related manufacturing debris (Fig. 2). Such material has been previously recorded from Greece, most notably at the Franchthi and Klisoura caves in the Argolid, assemblages that have been dated to between 33,000-40,000 years old, a lithic tradition that many have viewed as reflecting the first appearance of modern humans (Homo sapiens) in SE Europe, having come from Africa via the Levant, and Anatolia. 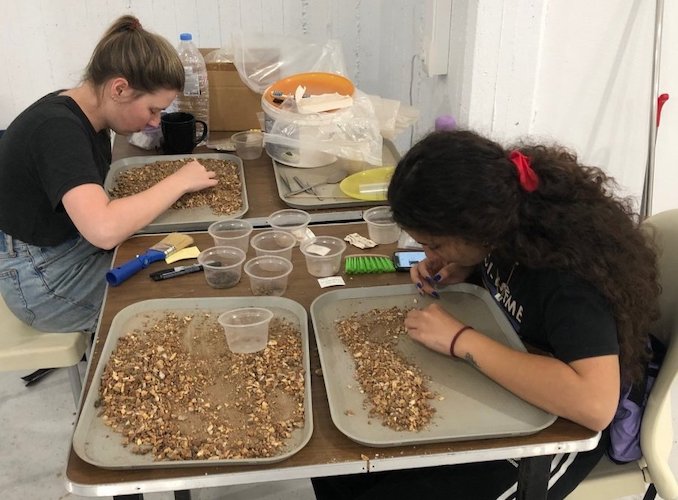 Alas, my time working through this fascinating assemblage came to a close all-too-early, as I had to ‘take one for the team’, and attack our backlog of heavy residue samples. This is a mass of material collected from water sieving, a process we employ as a means of recovering organics (which float to the surface, the ‘flot sample’), and micro artefacts that would otherwise be missed with our onsite screening of soil, i.e. tiny items that would slip through the mesh of our normal sieves. This latter material, which is captured by the finer-meshed screen, a mixture of stones, and artifacts, is referred to as the ‘heavy residue’ (Fig. 3). Typically we had been taking a sample of around 60 litres of soil per archaeological context, a relatively manageble amount in terms of the amount of time required to process from water seiving, via drying the sample, to sorting though the residue to extract all the cultural material. This changed, however, in 2019 when we discovered the later Bronze Age peak sanctaury, at which point we collected 100% of the soil, which was then lugged downhill in sacks for water sieving (Fig. 4). While we diligently worked our way through the the initial part of the process, by the end of the 2021 season we were left with some 65 crates of unsorted heavy residue, material that became a priority for our 2022 activities. 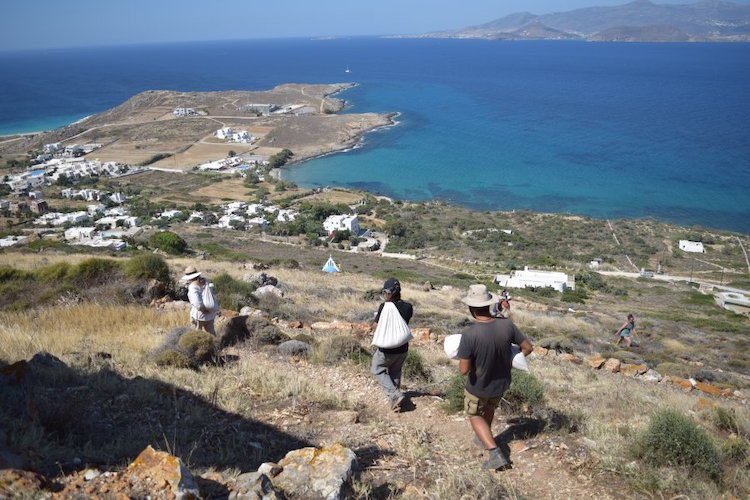 Figure 4: The 2021 team carrying sacks of soil for water sieving down the western flanks of Stelida from the peak sanctuary (D. Schulze / SNAP).

I won’t pretend that sorting heavy residue is the most exciting task, it involves sitting for hours, hunched over the sample diligently working your way through it with tweezers (Fig. 3). Luckily, unlike our Pleistocene samples which typically produce *nothing* (alas organics simply don’t survive our highly alkaline soils over tens, if not hundreds of thousands of years), the peak sanctuary heavy residue was remarkably productive. The best samples, from the eastern terrace, an area that has produced significant quantities of in situ (sensu latu) dedicatory objects, plus the residue of food prepration and consumption, contain quantities of carbon, plaster, tiny beach pebbles, pottery sherds, shell, animal and fish bone, mica-schist (broken roof tiles), and residual Palaeolithic stone tools. Once in a while we would find something a bit more special, including a carnelian bead, plus a not insignificant quantity of tiny bronzes, typically rectangular ‘strips’, or votive blades (Fig. 5), a well-documented form of offering from other peak sanctuaries, and the kind of treat that kept us going as we waded through our crates of heavy residue. Ultimately we prevailed, with all of the crates of heavy residue processed, a significant diminuation of our storage footprint. More importantly, we now have our samples ready for our various specialists to study, including detailing which animals, fish and molluscs were consumed in the rituals, and the plants and timber being burned. 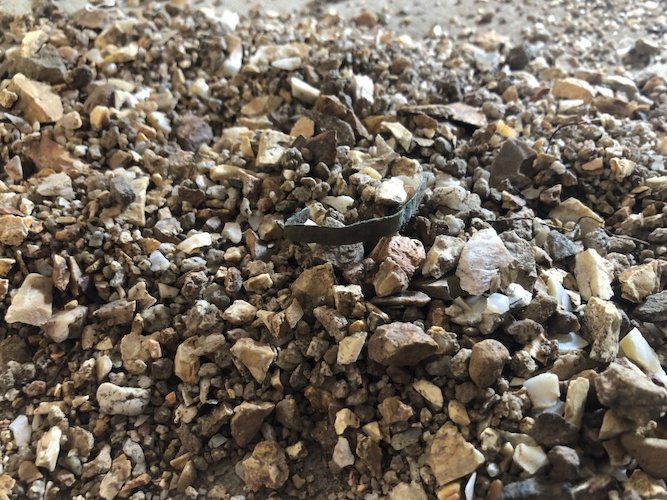 Figure 5: Making it all worthwhile… a tiny bronze strip from one of the hundreds of bags of peak sanctuary heavy residue samples (SNAP).

While SNAP 2022 was mainly a lean, mean, sorting machine, time was also made for some specialist studies. Shannon Crewson continued her work on the metals from the peak sanctuary (Fig. 6), a study that is part-contributing to a multi-authored paper we are preparing on two of the new anthropomorphic figurines, while Dr Vagia Mastrogiannopoulou (Lemnos Museum) focused on the ceramic assemblage, benefitting from discussions with Dr Jill Hilditch (Amsterdam University) on the fabrics, and technologies of Bronze Age Naxos. All of this work further benefitted our new junior team-members, and returnees, including undergrads from Athens, and Oxford, the experience of helping with the ceramic study, a welcome respite from the piles of heavy residue. 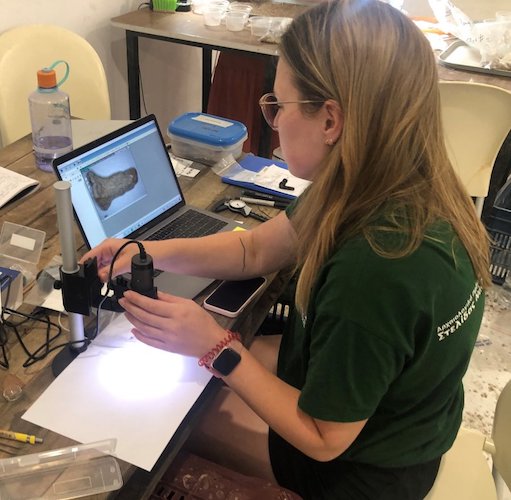 Figure 6: Shannon Crewson uses the project DinoLite microscope to detail one of the metal finds from the peak sanctuary (SNAP).

While we all look forward to coming back to Stelida – ideally to the field – in the summer of 2023, for one of us, the return to Greece will be much sooner. To our delight, long-term team member Shannon Crewson has been awarded the Canadian Institute’s prestigious Homer and Dorothy Thompson Fellowship for the 2022-23 academic year. Shannon has been with project since 2015, initially as an undergraduate, then from 2016-18 as a University of Toronto graduate student, her Master of Museum Studies underpinning her role as co-curator of our 2018 exhibition on Naxos. In 2020 she returned to McMaster as a PhD candidate, where she is now working on how to best represent the deep-time history of Stelida to the public, with her time in Greece this coming year being dedicated to her study of modern Greek, discussions with museum curators, and some ethnographic interviews with key stakeholders on Naxos.